It was a moment of celebration in the life 65-year-old Marikindi Ramaiah of Erravalli in Kondapaka mandal who is set to lose his land under Mallannnasagar project. Revenue officials visited his house on Saturday and handed over to him a cheque for ₹ 7.5 lakh at his doorstep.

Even Karunala Sattemma and Deshabattini Lakshmi of the same village, which comes under Gajwel constituency represented by Chief Minister K. Chandrasekhar Rao, received their cheques from the officials on Saturday. The officials were pushing to get the village vacated for the work on the reservoir which is a part of the Kaleshwaram Lift Irrigation Project.

“Karunala Sathamma and 17 others have approached the High Court seeking Rehabilitation and Resettlement (R&R) package with a plea that they be treated as a family under Section 3(m) of Fair Compensation and Transparency in Land Acquisition, Rehabilitation and Resettlement Act – 2013. The Court has directed the district administration to address the issue within two weeks and not get the village vacated till then. The Revenue Divisional Officer (RDO) of Gajwel has inquired into the issue and found out that Ramulu, husband of Sattemma had passed away three years ago and she had no children or other relatives to depend upon. She was not yet given compensation for her house. Based on the report we have handed over cheque number 017028 on October 16, 2020,” read the letter issued by Additional Collector and Rehabilitation and Resettlement Officer S. Padmakar.

“Initially, the officials had refused to extend R&R package to us despite repeated appeals. Finally, we were forced to approach the High Court. Now based on the Court directions they have handed over the cheque to me. There is no one to look after me. My wife and daughter passed away long ago,” Mr. Marikindi Ramaiah told The Hindu.

Sat Oct 17 , 2020
Share on Facebook Tweet it Share on Google Pin it Share it Email Today, water was sprayed on the roads of Wazirpur area – one of the identified hotspots. New Delhi: The Delhi Fire Services (DFS) has joined anti-pollution efforts in the national capital by sprinkling water across the city […] 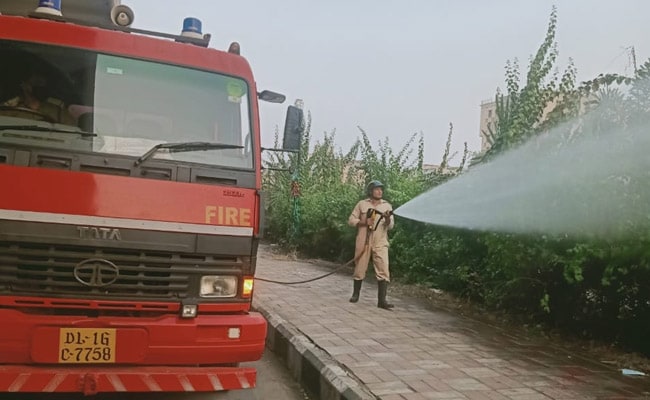