Around 3.75 crore palm trees, including small and high yielding variety, have been planted across the State as part of concerted efforts to give a fillip to the centuries-old traditional occupation of toddy tapping in Telangana, said Minister for Prohibition and Excise V. Srinivas Goud.

The State government waived the tax on palm trees to the tune of ₹16 crore and embarked on palm sapling plantation drive in mission mode to revive the traditional occupation and uphold its pride, he remarked.

The Minister was speaking after inaugurating the Thati Vanam (Neera project) at Ramannapeta under the Khammam Municipal Corporation (KMC) limits on Tuesday.

As many as 3,000 palm saplings, including the Indian date palm plants (Giraka Thati, Bihari Thati, Eetha and Kharjura), have been planted on 6.20 acres under the aegis of the local toddy tappers’ society at an estimated cost of ₹28 lakh as part of the Haritha Haram.

A ‘neera cafe’ is being constructed near the Tank Bund in Hyderabad at an estimated cost of ₹8 crore, he said, adding that efforts were on to promote the palm nectar (neera) in a big way across the State.

The by-products like palm jaggery are equally nutritious, he noted, emphasising the need for growing more palm trees under Haritha Haram to revitalise the traditional occupation and improve the livelihoods of toddy tappers.

Tue Jan 12 , 2021
Share on Facebook Tweet it Share on Google Pin it Share it Email Telangana Municipal Administration and Urban Development’s Commissioner & Director of Municipal Administration has bagged the second runner-up prize nationwide for the ‘Geo-spatial Mapping of Urban Properties’ under the ‘Janaagraha’ – City Governance Awards for 2020. Union Minister […] 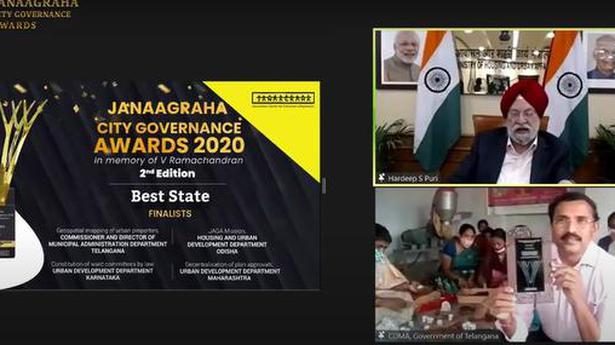 Guru Gobind Singh Spent 10 Years At This Gurudwara At 14,000 Feet