Minister for Agriculture S. Niranjan Reddy has stated that some 40 minor lifts would be taken up to cover the gap in ayacut and to irrigate every acre of cultivable land in Wanaparthy district by drawing water from the Mahatma Gandhi Kalwakurthy Lift Irrigation Scheme (MGKLIS).

He laid the foundation stone for a small lift scheme to fill Khan Cheruvu at Peddagudem in the district on Monday. The lift would draw water from the eighth distributary of MGKLIS to irrigate about 1,500 acres land belonging to 400 farmers. The Minister noted that the lift was being arranged/constructed with ₹79 lakh arranged by Pioneer Seed company under its corporate social responsibility.

A 120 HP motor would be installed to lift water from the MGKLIS distributary to impound Khan Cheruvu at Peddagudem. Mr. Niranjan Reddy alleged that hurdles being created by the Opposition Congress leaders of the constituency had delayed the provision of filling the minor irrigation tank at Peddagudem. He had requested the seed company to get the work done to fill the tank since the hurdles created by the Congress leaders was delaying formalities.

He suggested the people of Peddagudem to elect a village committee to manage the lift so that water was provided to their lands without any hassles.

Stating that schemes such as Rythu Bandhu, Rythu Bima, free 24×7 power supply and irrigation facilities had improved the confidence among the farming community, the Agriculture Minister said he had laid the foundation stone to complete the work to keep his election promise. District Collector Shaik Yasmeen Basha and others attended the event.

NIMZ comes back to haunt farmers

Mon Jun 29 , 2020
Share on Facebook Tweet it Share on Google Pin it Share it Email Yekkeli Mahipal is not sure how long the tag of farmer will stick to him, if his worst fears were to become true. A native of Metalkunta in Nyalakal mandal, he cultivates three crops a year in […] 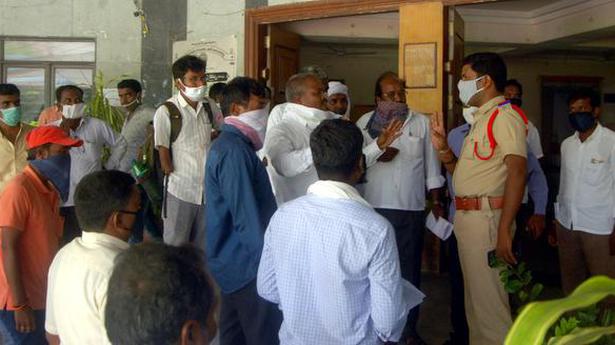