Chief Minister K. Chandrasekhar Rao will address a public meeting as part of TRS campaign for GHMC elections at Lal Bahadur stadium on Saturday evening but weather will hold the key to mobilisation of crowd in view of the prevalence of cyclonic storm Nivar.

The party has announced a congregation of two lakh people though a turnout of that size was unlikely by the admission of its own leaders. Nonetheless, an arrangement to set up a dozen mega LED screens outside the stadium was made to provide telecast of proceedings for those who could not come inside.

Mr. Rao will need to change the tone of his speech at this meeting from what he dwelt in the rally at Parade grounds ahead of GHMC polls in 2016. Barely 18 months into governance, Mr. Rao had spoken then about his refusal to yield to demands by the Centre to compromise on the position of Hyderabad when a separate State was formed. He stuck to his guns that there was no question of compromise as Hyderabad was the heart of Telangana.

The Chief Minister will have nothing to reflect on statehood issues this time as the contest had boiled down to meeting the challenge from rival parties, mainly BJP, which in its run-up to polls harped on communal divide of population in the city. Sources said he was expected to warn public while giving their mandate to choose between a development model set up by TRS and an ‘anarchic situation’ caused by the BJP.

What could be unsettling to Mr. Rao was the promises that he made immediately after TRS won the 2016 GHMC polls with 99 out of 150 divisions in its kitty. He had promised for the city one lakh double bed room houses for poor in four to five years, two drinking water reservoirs of 35 to 40 tmc ft capacity, island power supply and three new thousand bedded hospitals in addition to upgrading the King Kothi hospital to 1,000 beds.

Mr. Rao had been committed to giving up to then Industries Minister K.T. Rama Rao municipal administration portfolio which the former had retained soon after polls and he stuck to it. Mr. Rama Rao who had carried out road shows in TRS campaign then with large audience repeated the act now. His focus in road shows was the ₹ 67,000 crore development that took place in Hyderabad under TRS rule.

Jolt to Congress: TPCC treasurer to resign from party posts

Fri Nov 27 , 2020
Share on Facebook Tweet it Share on Google Pin it Share it Email Telangana Pradesh Congress Committee Treasurer and AICC member Gudur Narayan Reddy has decided to quit the Congress. It is understood that he is likely to join the Bharatiya Janata Party in the next few days. Top leaders […] 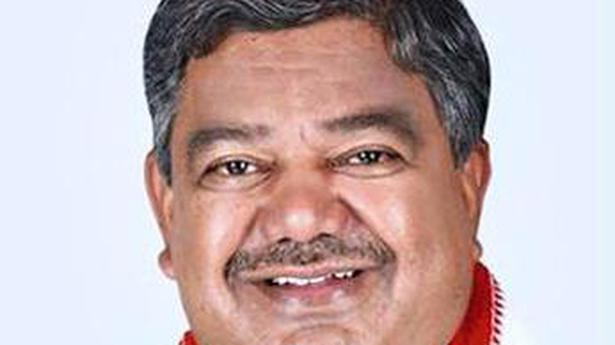