The Telangana government on Friday issued an order giving the Home Department permission to raise a squad of eagles for training them to neutralise drones during VIP/VVIP visits and official programmes in the State.

The order issued by the Finance Department following a request by the Home Department on June 26 to be allowed to raise ‘Garuda’ squad at the Integrated Intelligence Training Academy of Police at Moinabad on Hyderabad outskirts.

The Finance Department also gave permission to engage the services of two resource persons as trainers on contract basis.

When the squad is raised, the police of Telangana will become the second force in the world to use this method of tracking unauthorised drones. Earlier, police of the Netherlands trained eagles to take down drones amid concerns that they were increasingly being used to commit crimes.

However, it was said that the Netherlands had decided to retire its team of eagles that were trained after one and a half years because the birds did not always do what was expected of them as they were distracted by other things happening around them during training sessions.

It was also found that employing eagles in security issues meant unnecessary cost for the birds’ training and upkeep.

The decision to retire the eagles also pleased bird lovers who were concerned that the drones with their fast-spinning propellers could injure eagle if its speedy approach was off the mark. Instead, the Dutch police decided to explore other options like high-tech solutions that were far more reliable and cheaper to maintain than eagles. They included anti-drone guns and drone shield ‘sky fences’.

Such systems could be deployed relatively quickly and act swiftly to remove a rogue drone from the sky.

Eagles were said to be a preferred lot to combat drones because of their sharp talons and equally sharp eyesight which enabled them to pinpoint and pluck a drone from the sky in a single and fast manoeuvre. The Dutch police demonstrated the skills of eagles first in 2016.

Unauthorised structures pulled down in Serilingampally

Fri Jul 31 , 2020
Share on Facebook Tweet it Share on Google Pin it Share it Email The GHMC Town Planning wing has extended its drive for demolition of illegal structures to other parts of the city this week, and pulled down several buildings in Serilingampally zone. The corporation had been carrying out the […] 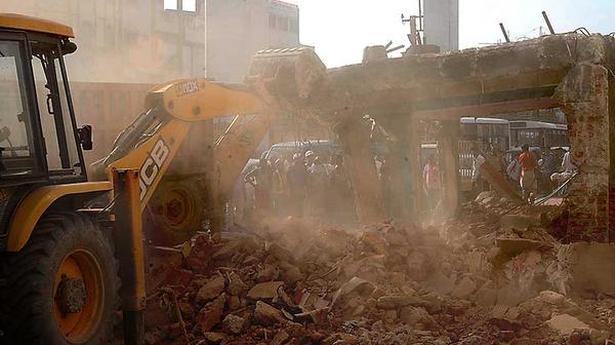