TikTok has been banned by the Government, along with 58 more apps including Shareit, UC Browser, WeChat, and others. The common factor to these various apps? They’re all made by Chinese companies. The government in its notice stated that these apps are prejudicial to sovereignty and integrity of India, defence of India, security of state, and public order.

As per a release from the Ministry of Electronics and IT (MEITY), the ministry has blocked the apps under the provisions of Section 69 of the IT Act, as well as provisions of the IT rules 2008, saying, “in view of information available they are engaged in activities which is [sic] prejudicial to sovereignty and integrity of India, defence of India, security of state and public order.”

A closer look at the 59 apps shows that the common thread is their Chinese-origin, but otherwise it is a very diverse set. Aside from TikTok, which is probably the best known app in the list, it includes Shein, an online apparel retailer, Shareit and ES File Explorer, which are used to transfer and manage files, Helo and Likee, which are social networks very similar to TikTok, news aggregator Newsdog, popular browser UC Browser, and strategy game Clash of Kings.

Many companies on this list were among those which had donated to the PM Cares fund, as highlighted by Congress leaders on Sunday. TikTok had given Rs. 30 crores to the fund, while Xiaomi, which has two apps on the banned list, donated Rs. 10 crores.

It’s a very mixed list, and it’s not clear how it was compiled. In the release, MEITY notes, “The Ministry of Information Technology has received many complaints from various sources including several reports about misuse of some mobile apps available on Android and iOS platforms for stealing and surreptitiously transmitting users’ data in an unauthorised manner to servers which have locations outside India. The compilation of these data, its mining and profiling by elements hostile to national security and defence of India, is a matter of very deep and immediate concern.”

According to MEITY, it has included representations from citizens to the Computer Emergency Response Team (CERT-IN) and also bipartisan concerns about apps raised both outside and inside the parliament.

TikTok was in the news recently for “snooping” on users’ clipboards, which was uncovered by the latest iOS 14 update that is currently a beta for developers. The app has long been seen as potentially overreaching in the data being collected. However, TikTok is not unique in this, and neither are apps from China. One of the biggest data scandals of our times is how Cambridge Analytica used data from Facebook to influence political campaigns.

The Internet Freedom Foundation, an advocacy to advance constitutional freedoms in a digital society responded to the government’s release with a statement. It said that this was not a legal order issued under Section 69A of the IT Act. It added that the blocks had been directed in an aggregated manner, while the section is individualised in nature. “The Blocking Rules, 2009 specifically provide for a defined process of notice, hearing and a reasoned order. These processes emerge from the Shreya Singhal judgement and apply to all grounds for blocking, including those premised on national security,” the IFF explained.

What’s a little unclear at present is how this rule will be enforced — whether they will simply be removed from the App Store and Google Play, and if so, will users who have already downloaded the apps be able to keep using them, or whether the access to the servers of these apps will be blocked.

TikTok has previously been blocked in India — it was removed from the two stores last year — but later restored. Some months later, both TikTok and Helo faced a ban over “anti-national activities”, but in this case it was able to keep going.

The current ban is likely related to the conflict between India and China and it’s therefore less clear if it will be as easy to resolve as in the past. Anti-China sentiment has seen the Make in India manufacturing units of companies like Oppo get defaced, and the brand had to reconsider holding a live launch event for one of its latest phones in the country.

All one can say for certain is that the current ban comes as a big opportunity to apps that are made in India, from Mitron to Chingari.

The entire list of 59 apps was included as an Annexure and it includes everything from chat apps, to tools such as ES File Explorer, to games. It’s hard to understand why these specific apps were chosen. The full list of banned apps is as follows.

Mon Jun 29 , 2020
Share on Facebook Tweet it Share on Google Pin it Share it Email Observing that there was ‘no legal infirmity’ in Telangana State Cabinet’s decision to construct a new Secretariat building, Telangana High Court on Monday dismissed a batch of PIL petitions which challenged the decision. A bench of Chief […] 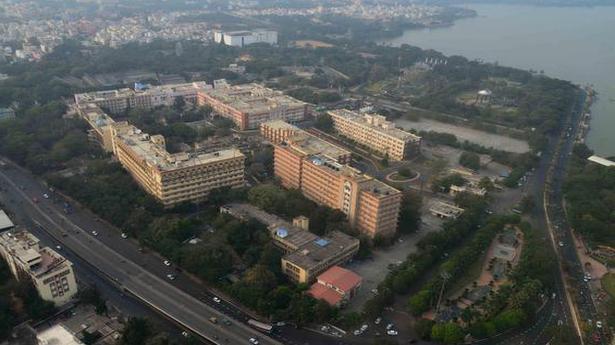