A police case has been filed against a senior police officer of Haryana’s Panipat, Manisha Choudhary, for allegedly abetting the suicide of a senior BJP leader and former municipal councillor, Harish Sharma. The matter acquired political overtones as the Deputy Chief Minister supported the police officer, who was booked after state home minister Anil Vij ordered action.

Sources said Mr Vij had summoned the state police chief Manoj Gupta on Monday and rebuked him for inaction.

Deputy Chief Minister Dushyant Chautala, however, came out in the support of Manisha Chaudhary and raised questions about the First Information Report against her.

“If an SP (Superintendent of Police) can be booked like this, then a case should be registered against the DGP (Director General of Police) for any crime in the state,” Mr Chautala said on Monday while addressing the media in Sirsa.

The 52-year-old councillor had allegedly jumped into a canal on November 19, after what his family said was harassment by the police. His body was found on Sunday. A friend who tried to save him had drowned as well.

The trouble had started during a police drive to enforce the cracker ban in the locality ahead of Diwali. The former councillor from Tehsil Camp, whose daughter now holds the post, had supported the people and a verbal heated exchange with the police on Diwali night.

Later, a case was filed against him, his daughter Anjali Sharma, and eight others under 11 sections of the Indian Penal Code.

The family said the matter had hugely upset him. On Thursday, Harish Sharma, who was staying with his friend, had called up his brother and announced his intention to end his life.

“My father was upset with the police as they were treating him like a terrorist. After registering the FIR, the cops were threatening him, which led to this suicide,” Anjali Sharma had told reporters last week after the incident.

Tue Nov 24 , 2020
Share on Facebook Tweet it Share on Google Pin it Share it Email Bangalore South Member of Parliament Tejasvi Surya triggered a Twitter storm on Monday during his visit to the city where he addressed a ‘Change Hyderabad’ campaign. The BJP leader posted details about his meeting in the city […] 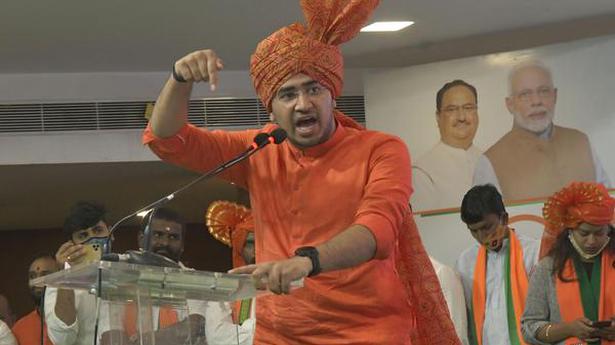