With Eid-al-Adha scheduled to be celebrated on Saturday amid COVID-19 pandemic, more people took to booking of livestock, sacrificing and distribution of meat online.

Several Muslims who would visit traditional sheep markets in Mehdipatnam, Toli Chowki or Saidabad opted to transact on cyberspace, given the several online slot booking available to them. With prices for slaughtering, skinning, portioning, packing and meat distribution available for anything between ₹8,000 and ₹14,000, or more, booking comes across as a more convenient and safer option.

“I used to go to the Mehdipatnam market every year. But this year, I didn’t want to take any chances because of the pandemic and booked a sheep for Bakrid sacrifice three days ago for ₹9,000. Given the coronavirus, the vendor who I dealt with offered hygienic zabiha (slaughtering), skinning, packing and distribution. Several of my extended family members have done the same,” said Abdul Samad, a resident of Nanal Nagar near Toli Chowki.

Mohammed Waseem, a resident of Noorkhan Bazaar, and a businessman too shared a similar experience. “I have two children and thought it best not to venture out because of the coronavirus. I booked two sheep online for ₹ 18,000,” he said.

While several did take to a ‘no-contact’ sacrifice, the traditional sheep markets of Mehdipatnam and the relatively newer but smaller Salarjung Bridge and Vijay Nagar Colony sheep markets saw a slow start. Abdul Hameed, a seasonal sheep trader for the past five years, said, “I brought 60 sheep from Alair. On chand raat (Eid eve) last year, I sold nearly 150 sheep, but now I am struggling to sell 50. Customer movement is slow. We had difficulty unloading the animals because police were being strict,” he said.

On Friday evening, after receiving information of sheep traders being allegedly harassed by police, All India Majlis-e-Ittehadul Muslimeen legislator Syed Ahmed Pasha Qadri and corporator Sohail Qadri reached the spot and intervened. “We will show all the videos of police high-handedness to the Commissioner of Police tomorrow. It seems that police do not want to let these people do business for even four or five days,” the Yakutpura legislator said.

Those in the know claimed that till recently, transporters has problems bringing livestock into the city. “I can understand cows being stopped by police. But why stop transport of sheep,” asked a trader.

Touching upon the price of sheep, buyers said that there is a marginal difference as compared to last year. While a pair of sheep each weighing approximately 12 kg was selling for anything between ₹15,000 and ₹18,000, those in markets on the city outskirts struck a decent bargain. “I went around Mehdipatnam market and the ones in Pahadishareef, Balapur and Jalpally on the outskirts. It seems that the prices are slightly higher in the city. I bought a pair of sheep for ₹14,000 from Pahadishareef. A lot of the livestock here came from places like interiors of Shamshabad and Shadnagar,” said Kareem Ansari, a city resident.

Fri Jul 31 , 2020
Share on Facebook Tweet it Share on Google Pin it Share it Email A decline in the number of people visiting temples in the city has adversely impacted the functioning of the religious places. While the temples managed by Telangana Endowment Department (ED) are functioning normally, the smaller temples which […] 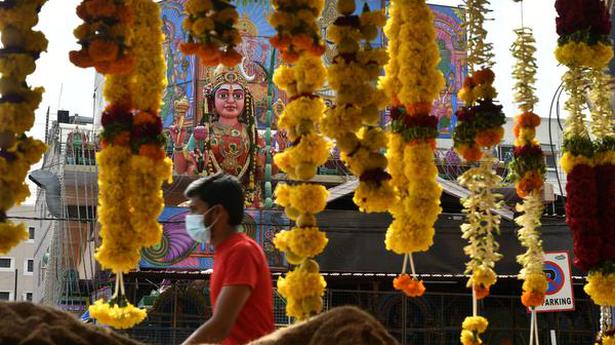